An American Life, Ronald Reagan's comment to Nancy Reagan after the assassination attempt on March 30, 1981

On March 30, 1981, President Reagan was leaving the Hilton Hotel in Washington, D.C., where he had been talking to 5,000 members of the AFL-CIO when several shots were fired. John Hinckley, Jr., fired his .22 caliber revolver with “devastator” bullets at the President and his security team. Reagan was wounded when one of the bullets ricocheted off of the limousine, striking him under the left armpit. Press Secretary James Brady, Secret Service Agent Timothy McCarthy, and policeman Thomas Delahanty were also wounded during the shooting. President Reagan’s wounds were not noticed until he began to cough up blood. He was then taken to the George Washington University Hospital. After twelve days in the hospital, he was able to return to the White House with a new commitment to changing the relationship between the United States and the Soviet Union. 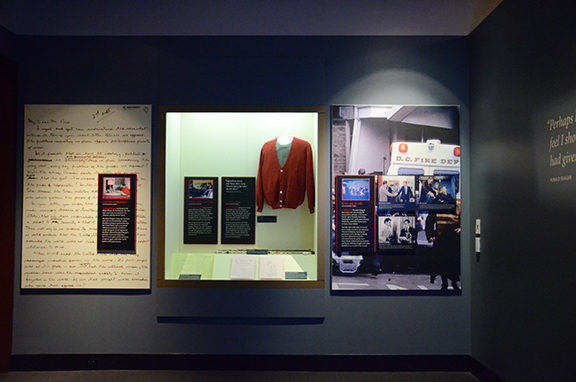