Dinner and Dancing with Prince Charles and Princess Diana

The dinner for the Prince & Diana was a great success. It had not a hint of “State Dinner” flavor. Everyone seemed to have a wonderful time. Ted G. had decorated the W.H. more beautifully than we’ve ever seen it. Leontyne Price sang wonderfully & then everyone danced like at a Junior Prom.

Do you know the full history that led to the famous photo of Princess Diana and John Travolta dancing to the soundtrack of Saturday Night Fever at a private dinner in the White House? Their iconic photograph was captured by White House Photographers 35 years ago during the Royal Highnesses first joint visit to the United States. The event was on an intimate scale with only 80 guests, most selected by the Reagans with a few suggestions by the Prince and Princess of Wales. The star-studded guest list included Neil Diamond, Clint Eastwood, Tom Sellek, and Rear Admiral Alan B. Shepard. .

John Travolta was not the only guest to grab a dance or spend a moment talking with royalty that night. However, his turn around the dance floor captured the attention of the world. The moment was not a fluke or a chance happening. Instead, it was a well-orchestrated moment put together by Mrs. Reagan herself. Princess Diana mentioned to Mrs. Reagan that she wished to dance with a certain dinner guest. Flattered but somewhat awed, John Travolta told Mrs. Reagan that he couldn't possibly ask the Princess to dance. The First Lady replied, "Oh yes you can." The pair danced for almost 15 minutes, the moment going down in pop culture history.

Dancing was not the only entertainment the President and First Lady planned. Festivities began earlier that day after the Prince and Princess of Wales landed in the United States. Their first stop was a more formal greeting at the White House, where coffee was served and gifts were exchanged. The Reagans gave Prince Charles and Princess Diana two gifts. The first, an authentic 18th-century deed that represented a pre-royal link in the chain of title to Sandringham, was gifted to Prince Charles. The second gift, a silver “dates to remember'' calendar, was from Mrs. Reagan to Princess Diana. In return the Royal Highnesses gifted a blue leather album with the Prince of Wales insignia. After this 40 minute meeting, the two couples went about their day of meetings and sight-seeing, not getting back together until dinner was held across several rooms in the White House.

The guests attending the dinner party were surrounded by a popular 1980s decor of peach linens and pastel roses with maidenhair ferns. The U.S. Navy harpist and flutist serenaded guests from the East Wing Foyer. Before dinner began, guests participated in a receiving line, shaking President and Mrs. Reagan’s hands, as well as the Prince and Princess of Wales. Everyone then proceeded to the State Dining Room for dinner, where the White House Chefs served lobster mousseline with Maryland crab and peach sorbet baskets.  President Reagan and Prince Charles both gave a toast before everyone moved on to the East Room for a musical performance by opera singer Leontyne Price. The party continued until past midnight.

Unidentified harp player at Dinner for Prince Charles and Princess Diana of the United Kingdom, 11/9/1985 c31875-34 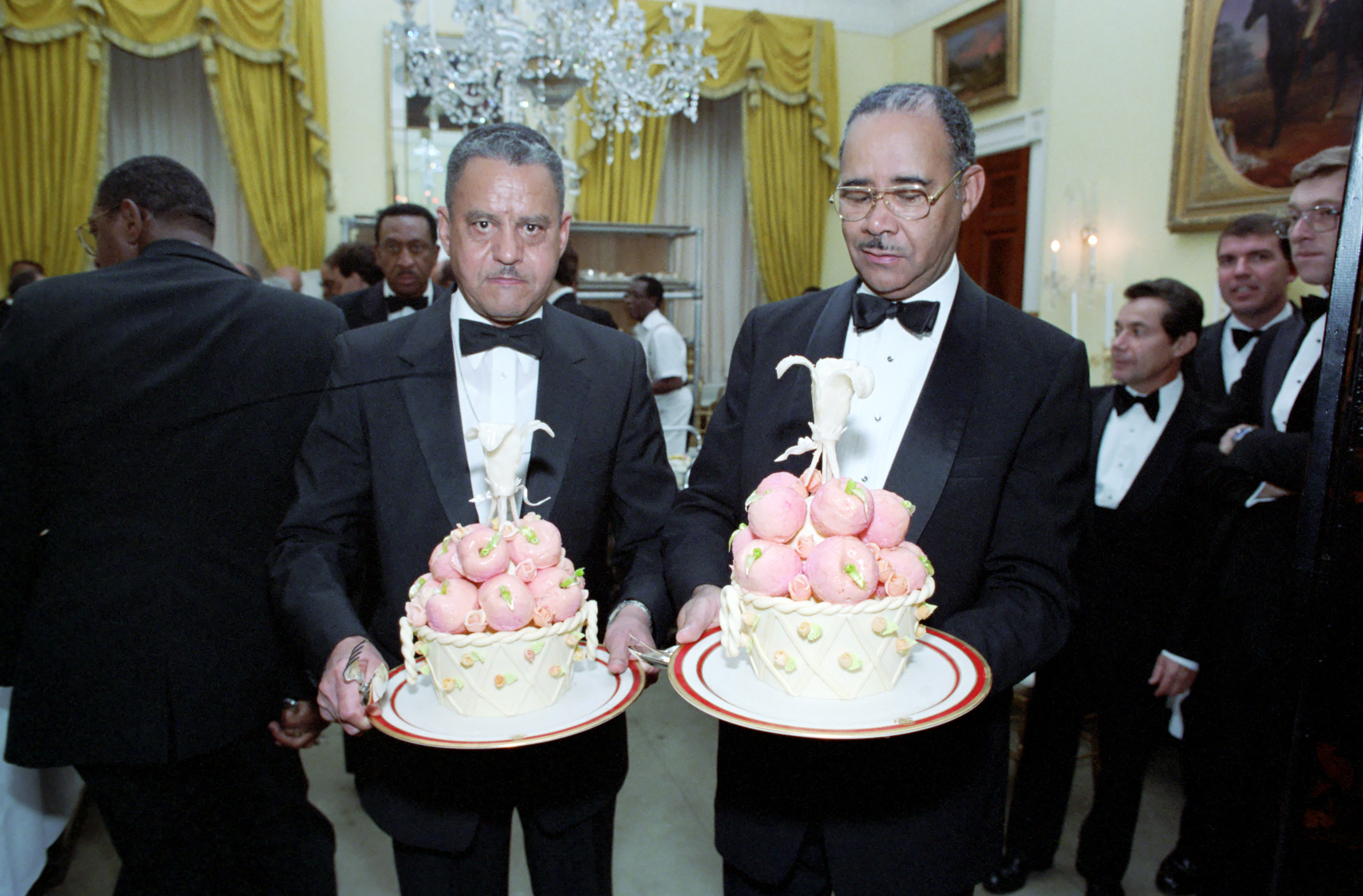 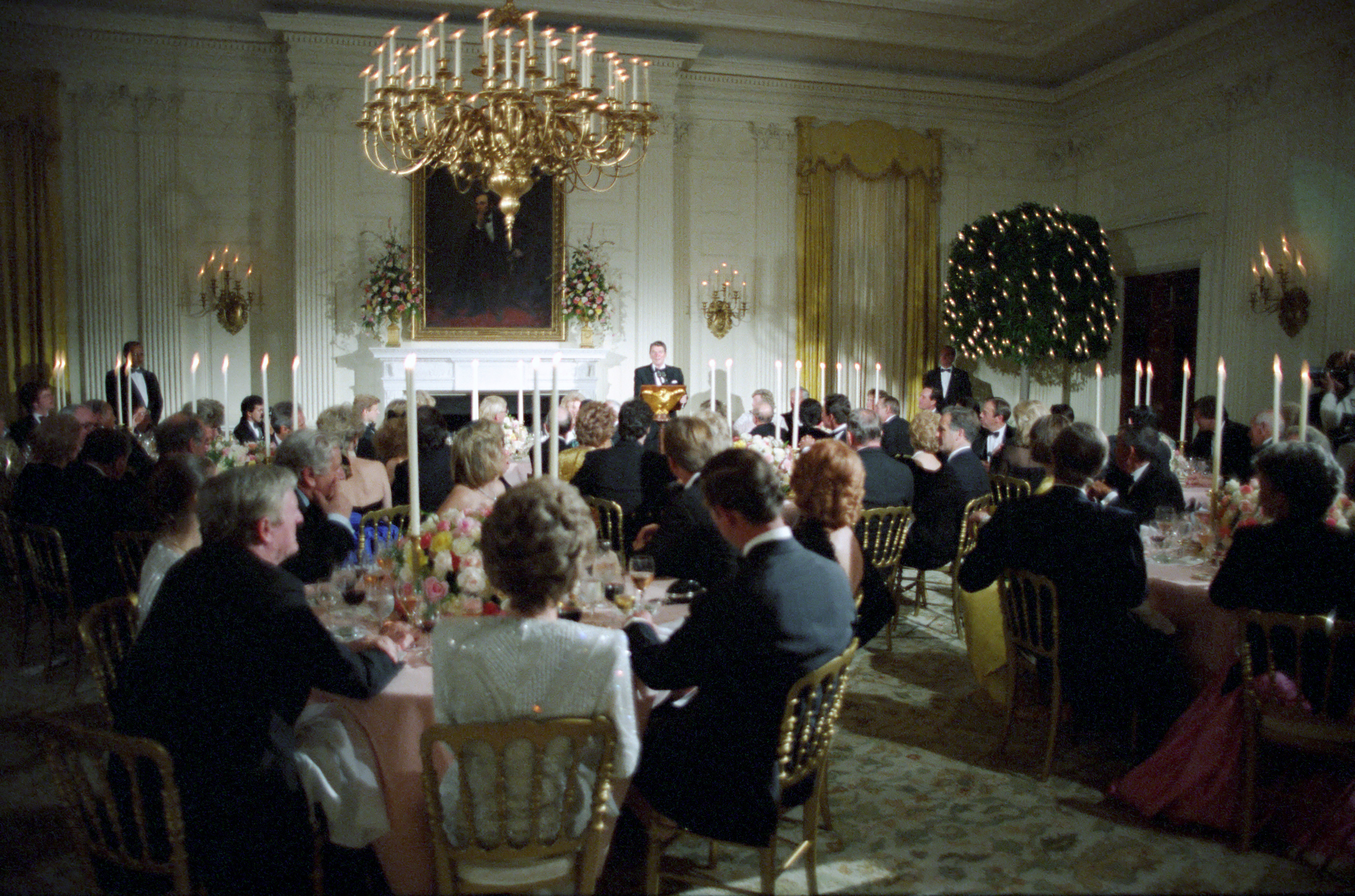 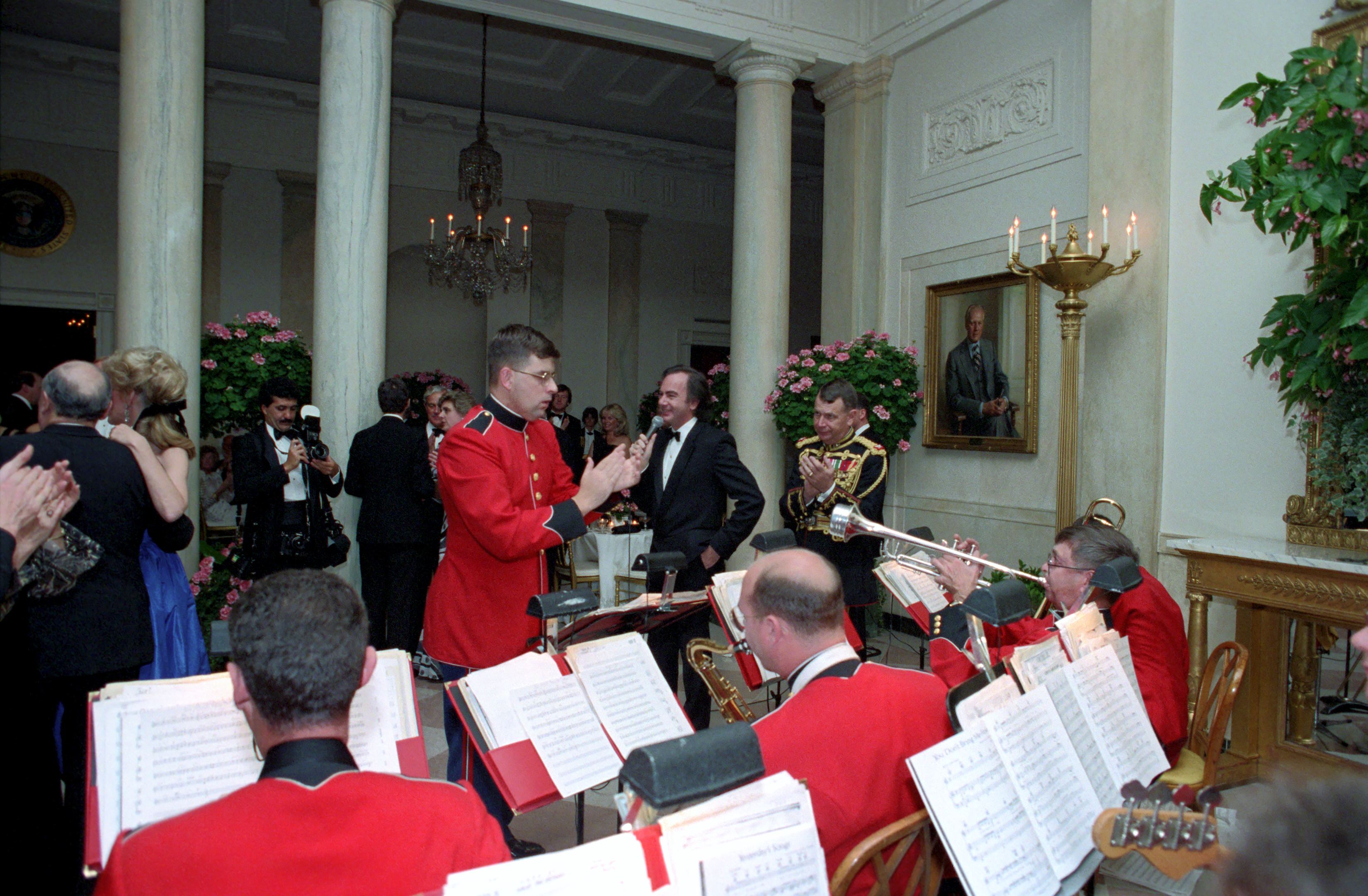 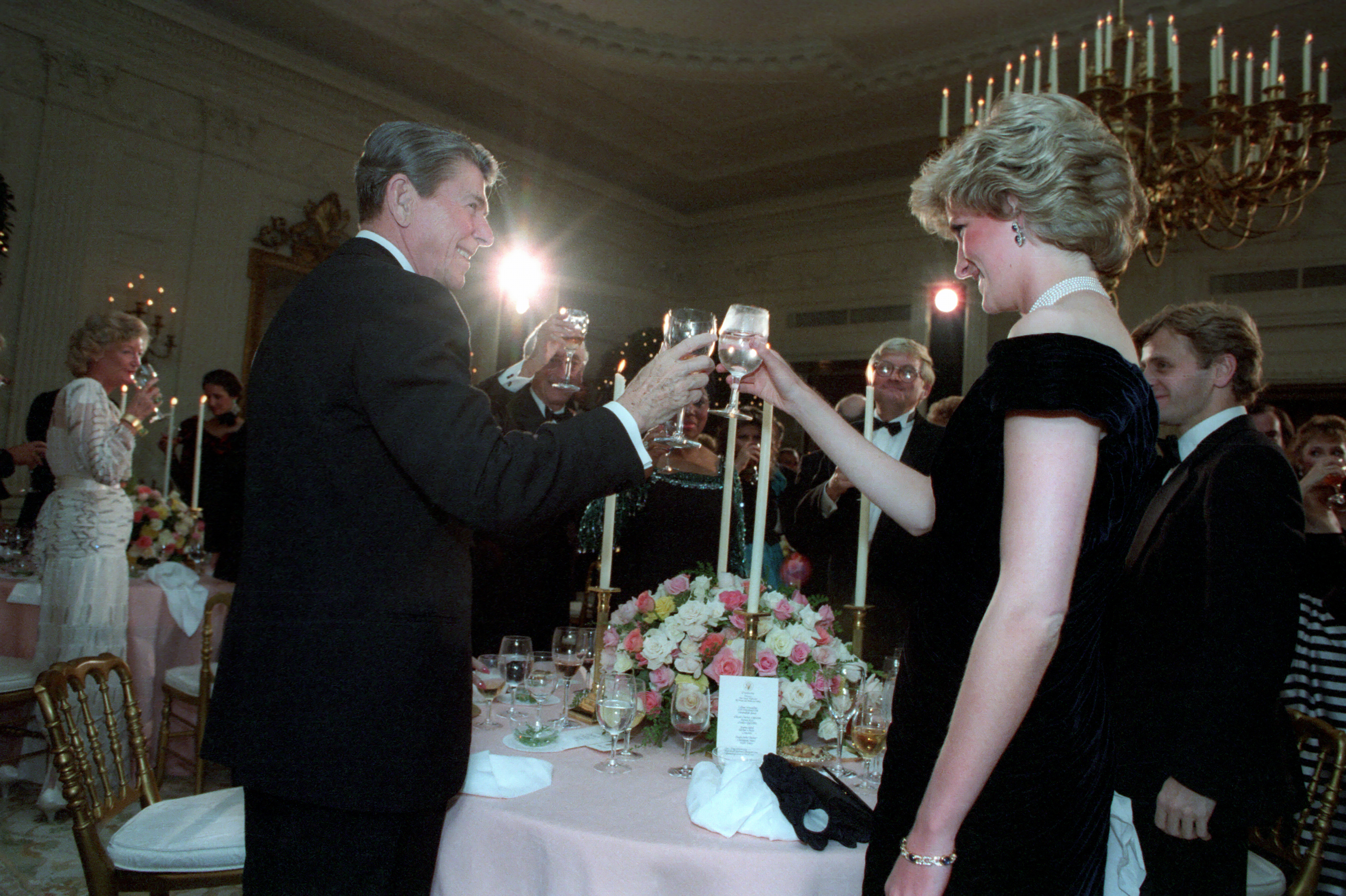 This dinner also served as an occasion to celebrate Prince Charles and Princess Diana as patrons of  the exhibit “The Treasure Houses of Britain: Five Hundred years of Private Patronage and Art Collecting,” which had opened on November 3rd at the National Gallery of Art in Washington, D.C. The exhibit showcased over 700 objects from country houses across Great Britain from the 15th century to the 20th century. The curators of the exhibition chose paintings, sculpture, furniture, Oriental porcelain, drawings, tapestries, jewelry, armor, silver, and other decorative arts that told the story of British life. President Reagan and Nancy Reagan visited the exhibition before its opening to the public.