In honor of Queen Elizabeth II's Platinum Jubilee, we are taking a look back at her first visit to California in February and March of 1983. As part of her 10-day tour of the West Coast, Queen Elizabeth II planned on sailing into Santa Barbara on Her Majesty’s Yacht Britannia to meet up with President Reagan and Nancy Reagan before heading up to Rancho Del Cielo for lunch and a horseback ride around the property. A severe storm, which brought more than three times the normal amount of rain to the area, made several last-minute changes to their meeting. The storm was howling and dumping rain on Santa Barbara and the coastline.

The storm effect on the ocean, with multiple news agencies stating that there were 30 foot waves off the coast, had Queen Elizabeth II and Prince Philip opt to take a U.S. Air Force plane from Long Beach to Goleta where the couple was met by President and Nancy Reagan. The reception was held within a hanger to protect everyone from the raging storm. While no statements were given to the press and waiting crowds, there was still a little bit of fanfare to enjoy with a row of howitzers performing a 21-gun salute and the Air Force band playing ‘God Save the Queen’ and ‘The Star-Spangled Banner.’

The group left the airport in two separate limousines and headed up to the Reagans’ Santa Barbara home, Rancho Del Cielo.  Due to the amount of rain and now hazardous conditions the El Nino storm had created on the road leading up to the ranch, the group had to switch from limousines to SUVs. The storm's flood conditions made some of the roads impassable and created other hazards along the way. Several trees and rocks had been uprooted along the road. According to her Press Secretary, the Queen described the trip as “delightful and terribly exciting.”

The Queen and Prince Philip wore traditional English khaki raincoats, Mrs. Reagan a red raincoat, and President Reagan a denim jacket. While there, Queen Elizabeth II delivered remarks on the American support for Britain in the Falklands War as an example of the historic Anglo-American alliance.

The group settled down for a Mexican inspired lunch of the regions’ cuisine, featuring enchiladas, chiles rellenos, refried beans, tacos, rice, and guacamole.  ( menu information comes from whitehousehistory.org) and sat inside by a large fire. The weather canceled any chance of the Queen being able to see California by horseback, but she said she was looking forward to another visit. 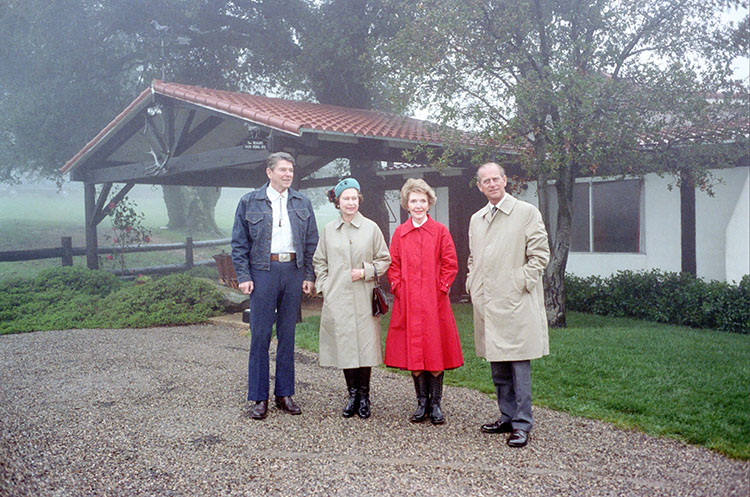 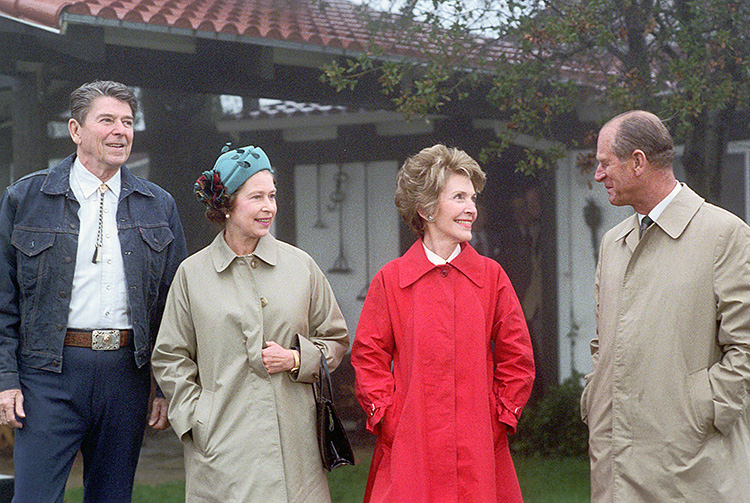 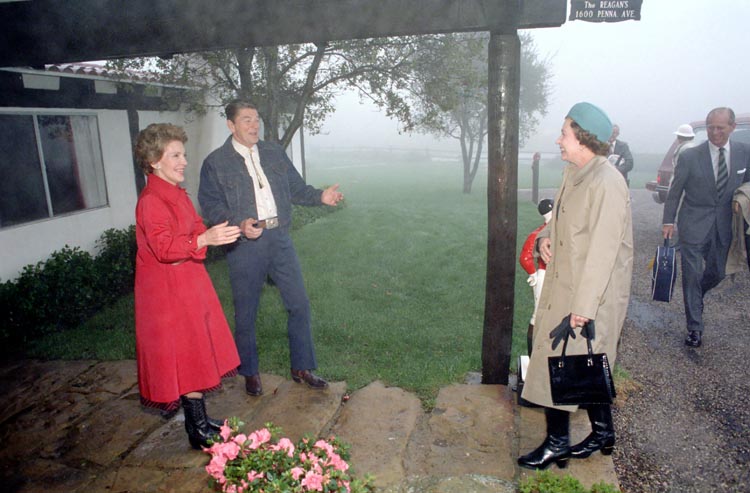 On March 3rd President Reagan hosted  a dinner event in honor of Queen Elizabeth II and Prince Philip at the M. H. de Young Museum in San Francisco. The Queen chose a beaded ivory gown and Mrs. Reagan a teal blue green gown. During her speech at the dinner, Queen Elizabeth II stated, “I knew before we came that we had exported many of our traditions to the United States, I had not realized before that weather was one of them."

In honor of Reagan's 31st wedding anniversary, the President and Nancy Reagan met up with Queen Elizabeth II and Prince Philip on March 4th.  The dinner event was held on Her Majesty’s Yacht Britannia. Ronald Reagan described the event in his daily diary, “It was a magic evening. The Queen & His Highness are really warm, likable people. Others came aboard after dinner for a reception & we spent the night on board.” 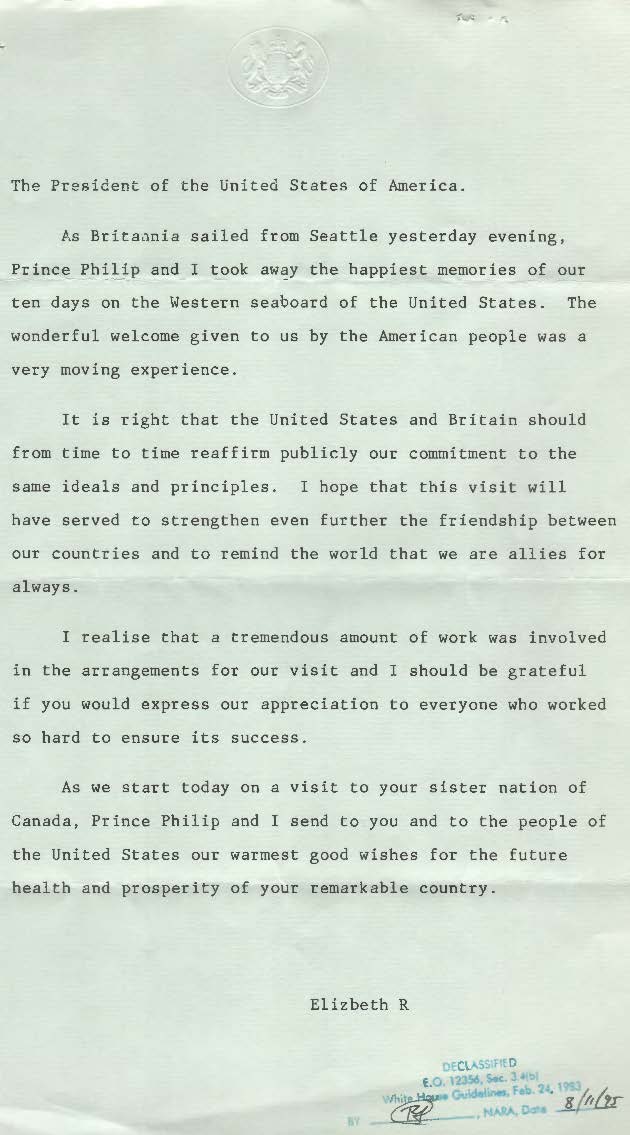 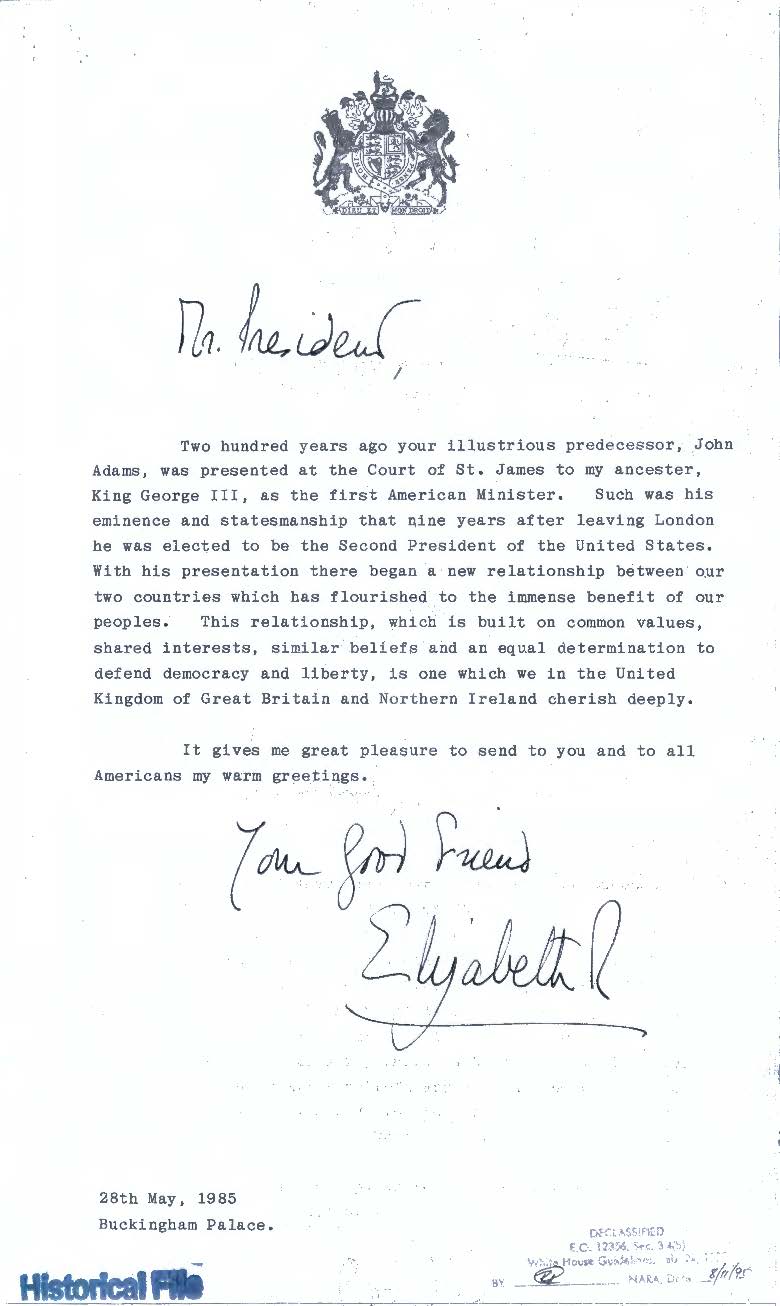 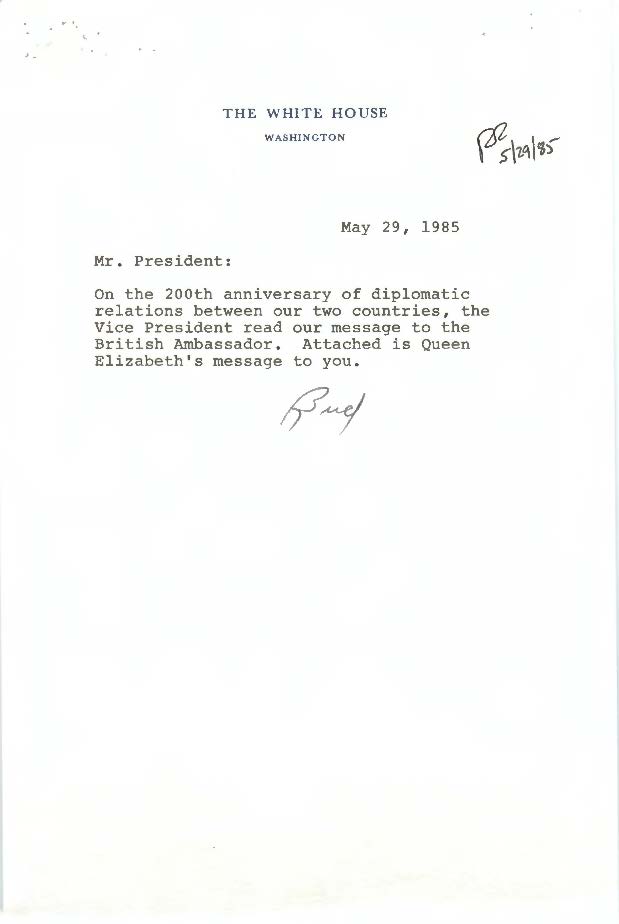 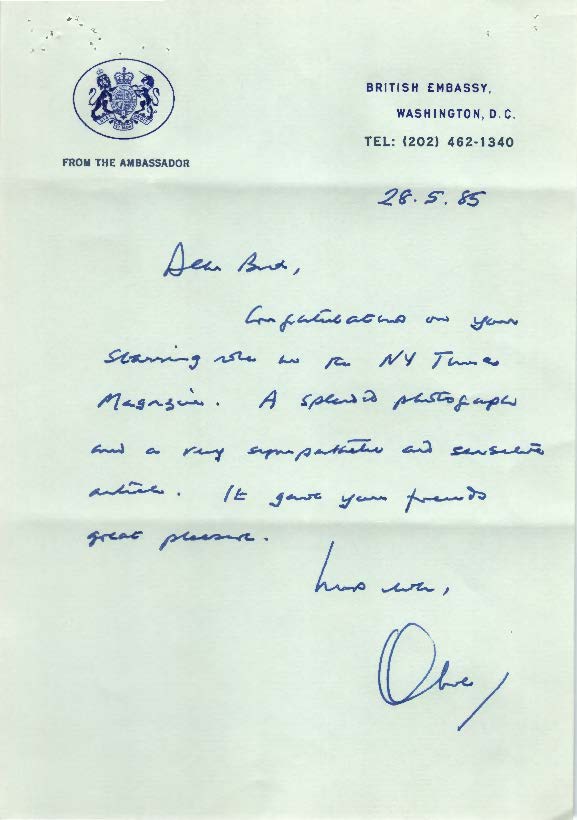 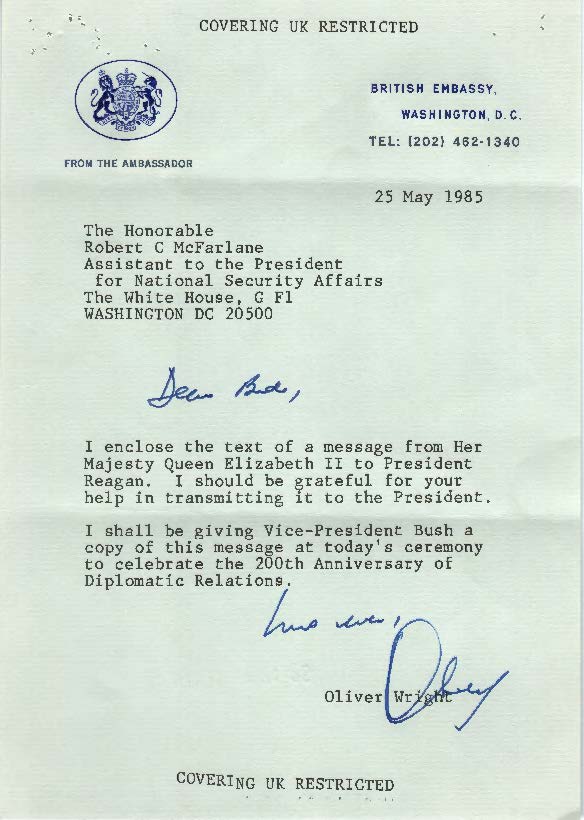 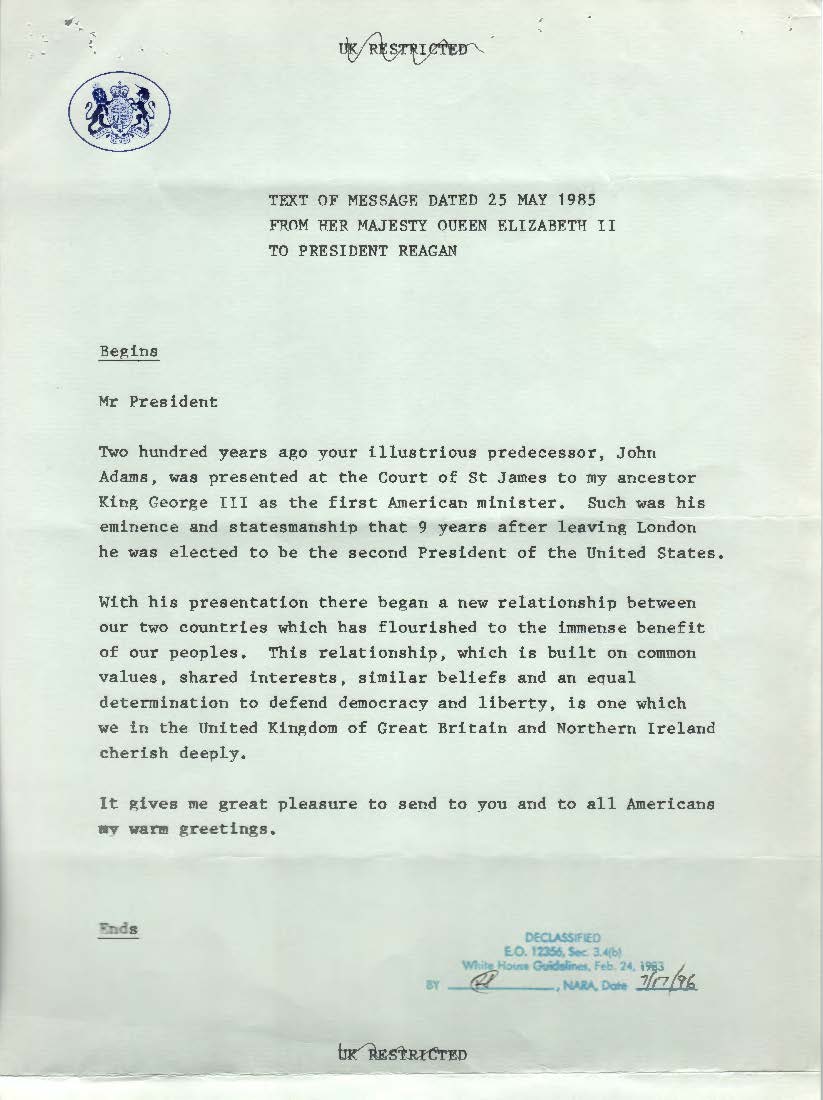 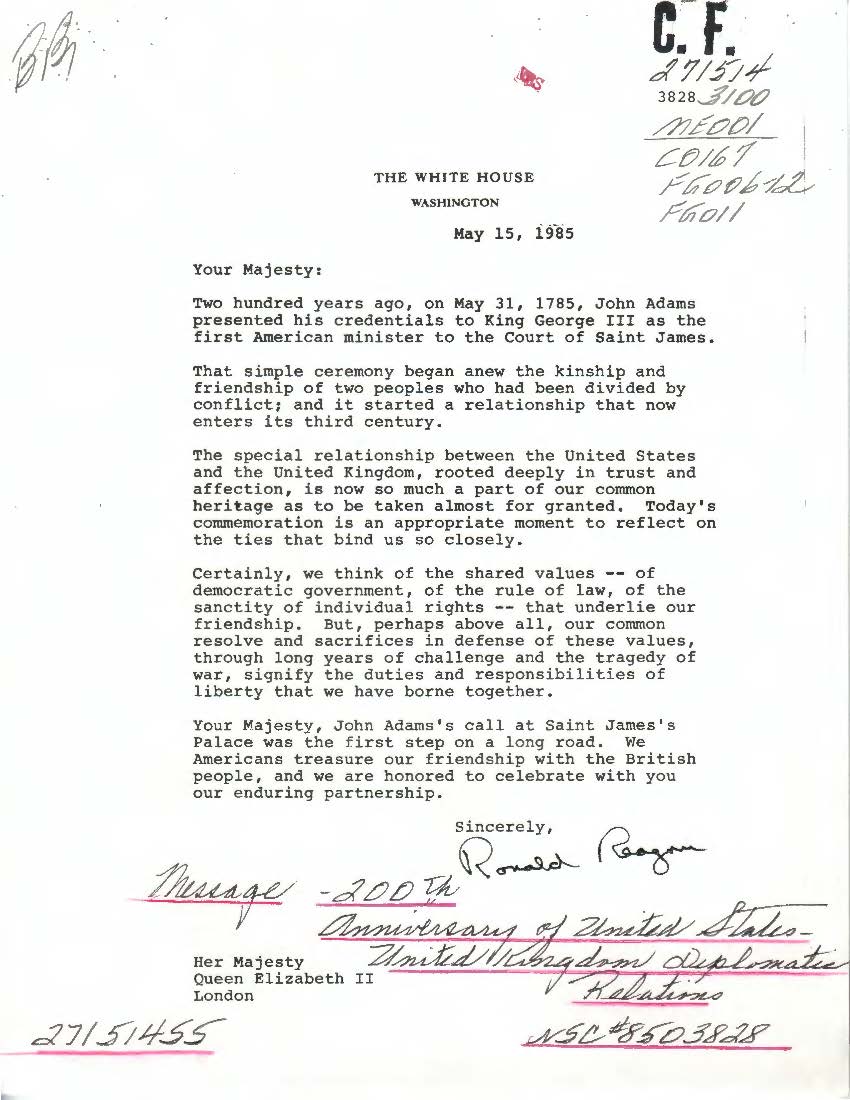 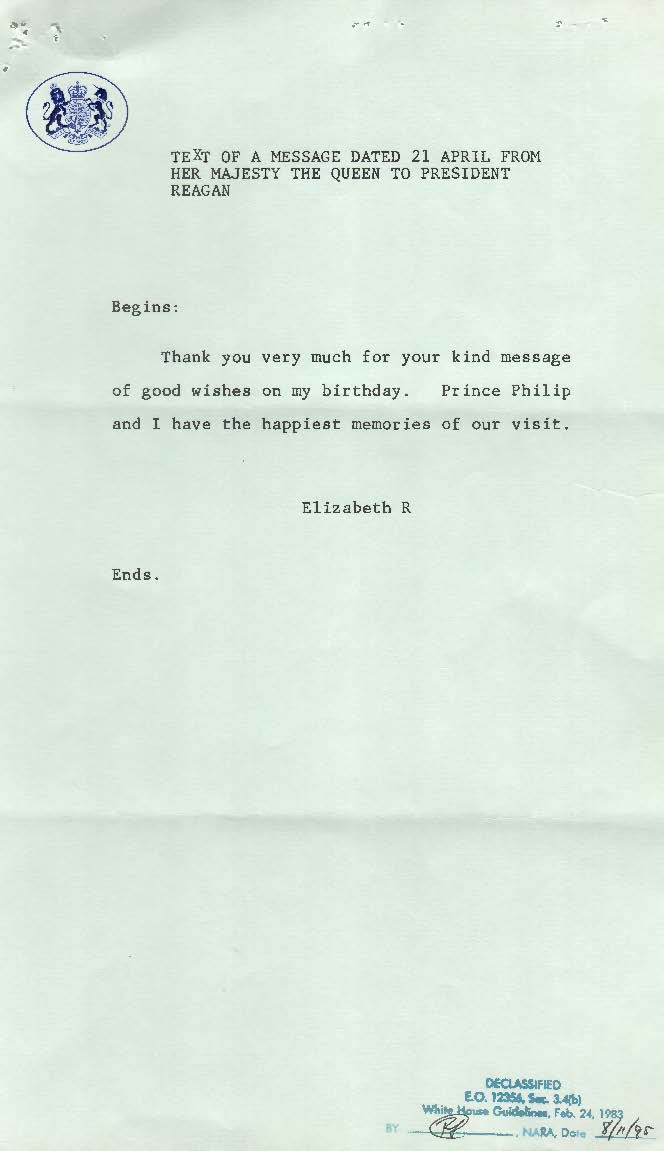